Gokhale Institute of Politics and Economics has bagged the second prize in the prestigious Firodiya Karandak multi-talent inter-college competition of 2022, along with seven other individual and group prizes. The success tasted sweeter than it sounds, as the University reached the podium in its first participation attempt!

To be fair, though GIPE has a strong legacy in policy oriented research, the Institute was not active in the cultural realm of Pune, which is both a cultural and educational hub. The achievement in Firodiya Karandak this year has changed it.

‘Oh My Sapien!’ as the play was named, was a collective effort of the 31-member team. It is based on the premise that humanity is losing the grip on collective well-being with individuals becoming more selfish. The powerful characters of Hari, Bramha, Shakti, personify the mythological trio Brahma, Vishnu and Mahesh, and the protagonist’s tryst with them sets up the stage for the core of the plot. They collectively solve the crisis of humanity depleting in value with the help of…wait for it…technology!

“Generally, plays presented in the competition feature the history or social genre. We wanted to break this trend in our maiden attempt, and set up a new genre – contemporary social messaging,” student representative Dhaval Chitley says.

The organisers of the competition gave away the prizes in an official ceremony on 24 March, in the presence of celebrated film director Anurag Kashyap, and veteran Marathi actor Mohan Agashe.

The University felicitated the team on Friday, 25 March 2022, in the auspicious presence of Satish Alekar, an eminent theatric, art director, and actor, who teaches at the Lalit Kala Kendra (Centre for Performing Arts) at the Savitribai Phule Pune University. Newly appointed Vice-chancellor of the University, Ajit Ranade, was present on the occasion.

Alekar congratulated the team who turned around a pleasant surprise.

“Even though you are not entering the performing arts as a professional, an experience like performing in a competition like this gives self-confidence,” he said.

“When you are on the stage, you are standing up there, in the limelight, and you are minutely watched by people. There, you are not just yourself; you exude sociology, politics, and aesthetics in the performance,” he said. That sets it apart from any other experience, he said.

“Serious art is not profit inducing. It may give you intellectual pleasure, but it may not generate money. Money making is a characteristic of the entertainment business. The size of that industry is huge, about Rs 20,000 crore annually.”

In his speech, Alekar praised the upcoming New Education Policy that will diffuse the hard borders between academic disciplines and enable education seekers to be flexible in managing a part of their credits from institutions other than where they have been enrolled.

“Once the system is in place, I invite economics students from GIPE to the Savitribai Phule Pune University to share credits in arts,” Alekar mentioned. He nudged the team to participate in the Purushottam Karandak inter-college play competition, which usually happens every summer.

Ranade gave the vote of thanks. He patted the back of the team, saying, “The first prize probably eluded us this time to encourage us to achieve that in the next year!” He joined Alekar in highlighting the flexibility students would get under the upcoming New Education Policy. 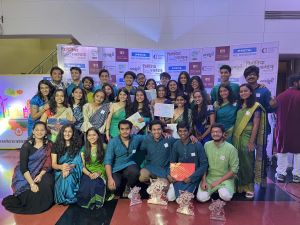 The Achievers: The cultural team of Gokhale Institute of Politics and Economics on stage at the prize distribution ceremony of Firodiya Karandak 2022 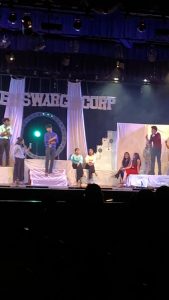 In action: Actors and artists in action during the final round performance of GIPE in Firodiya Karandak at the Annabhau Sathe Auditorium, Pune

Felicitation of Dr. Ajit Ranade VC,GIPE at University of Pune on 8th March 2022.